An initiative of the University Foundation

Too many students? On the purpose, legitimacy and adequacy of university entry and orientation tests 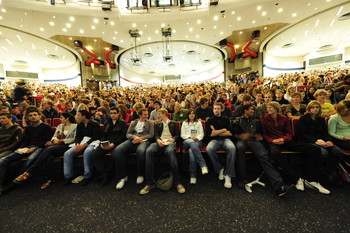 Owing to various social and educational developments, the number of higher education students increased enormously over the last decennia. Higher education has become more and more inclusive, but at the same time, new concerns and challenges have emerged. Universities and other higher education institutes are faced with a high failure rate, especially in the first year; a substantial share of the students never gets a degree; many students get a degree that is allegedly ‘worthless’ on the labour market; there are not enough professors and other resources to guarantee quality education for all. Against this background, various measures are being tried or envisaged in order to improve the efficiency of the system and to reduce the number of students who mobilize the time of the higher education institutes, space and money with little benefit to themselves, to the institute or to society. They include admission and orientation tests before starting higher education, and exclusion procedures in case of bad failure at an early stage.

The discussion is going on now and many questions arise. To start with, do we really have to introduce entry and (re)orientation tests and if so, how can it be done in a fair and efficient way? One of the main objections against the tests is that they will worsen the prospects of students with a less advantaged socio-economic and cultural background. But is that necessarily the case? Another concern has to do with the added value and the validity of the tests. Are they worth what they will cost? Are they more efficient than secondary schools exams? Are potentially strong and weak students recognizable before they start higher education? Do we need open orientation tests or exclusionary entry tests? Should the tests be organized at the level of the faculties, the universities, the higher education institutes or the governments? Finally, can a restriction of access to university be efficient and fair in the absence of a simultaneous mental shift throughout society that ascribes greater value to training and education outside the university?

The aim of this Ethical Forum was to stimulate reflection on the important question:

Are orientation tests and admission exams to higher education institutions a fair and efficient way to guide students?